George Atallah is the Assistant Executive Director of External Affairs for the National Football League Players Association (NFLPA). Mr.Atallahserves as a spokesperson for the players, communicating on issues related to the league.

Jim Morris is Managing Editor for environment and labor at the Pulitzer Prize winning Center for Public Integrity in Washington, DC. A journalist since 1978, Morris has won more than 70 awards for his work, including the George Polk award, the Sidney Hillman award, three National Association of Science Writers awards and five Texas Headliners awards.

Jonathan Ruckdeschel is the founder of the Ruckdeschel Law Firm, whose cases involve defendants whose products, actions, or negligence has caused harm to others. He has litigated numerous employment, discrimination, and medical malpractice claims, including those involving serious personal injury. A casual fan of football, he despises the Patriots.

Jerry Thornton is the author of Darkness to Dynasty: The First 40 Years of the New England Patriots and Six Rings. Heis a former co-host of WEEI Sports Radio Network's Dale and Holley with Thornton Show. Jerry currently writes for Barstool Sports and is a rabid Patriots fan. 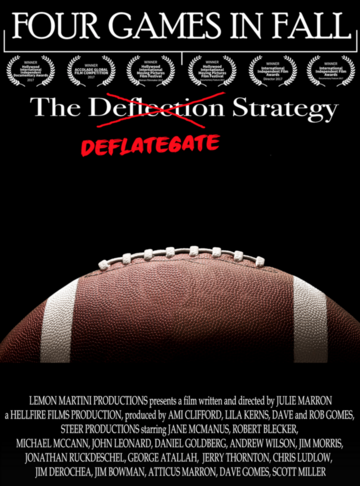 How to Manufacture a Scandal

Award-winning Tom Brady Deflategate Documentary Four Games in Fall has been scheduled for a Thanksgiving release worldwide across all major streaming platforms including Amazon Prime Video, iTunes, and Google Play.

Interviews with leading scientists, journalists, and legal scholars demonstrate how the scandal was perpetrated without evidence.  The film draws parallels with how public opinion, regulation, and science are manipulated to influence important issues impacting all citizens.

In the AFC Championship game between the New England Patriots and the Indianapolis Colts in January of 2015, NFL quarterback and Super Bowl champion Tom Brady was accused of intentionally deflating footballs to gain an advantage.  The media frenzy that followed this allegation of cheating included months of front page news and culminated in Tom Brady’s punishment to sit out four games of the 2016 season for his role in the scheme.

However, independent scientists from leading institutions across the country determined that there was no evidence of deflation outside of weather induced changes. Reports emerged that the NFL deliberately leaked false information about the data.  Nationally renowned legal experts testified that the case was misrepresented in the legal battle that ensued. Despite the evidence that the controversy was rooted in an incident that never happened, public sentiment had solidified against Tom Brady, and he was branded a cheater.

Through interviews with top scientists, journalists, and legal scholars, Four Games in Fall peeks behind the curtain of the controversy to examine how the scandal was perpetrated despite no evidence of wrongdoing using time-tested tactics of media manipulation and investment in ‘science for hire.’ The film examines how the tactics used in the Deflategate controversy are frequently used to manipulate public opinion, enact regulation, and influence legal outcomes on important issues that impact the daily lives of average citizens.

The film also explores the likely motivation for the scandal as a deflection from significant threats plaguing the league, including negative press over handling of domestic violent incidents and the existential threats of CTI and traumatic brain injury impacts on players.

Robert Blecker, Professor emeritus of Criminal Law and Constitutional History at New York Law School, has helped pioneer the field of Jurisprudence of Sport.  A leading retributivist who has written and debated extensively on crime, punishment, and just deserts, Blecker, the author of “Penalties: Punishments, Prices, or Rewards,” covered the 2016 & 2018 Olympics for the Observer and contributes to the International Association for the Philosophy of Sport.

Jane McManus is the Director of the Center for Sports Communication, Professional Lecturer of Communication at Marist College, and a sports columnist for the New York Daily News. She formerly covered the NFL for ESPN and was a columnist for espnW. She hosted The Trifecta with Kate Fagan and Sarah Spain, and was a frequent analyst for SportsCenter, The Sports Reporters, and Outside the Lines.

Michael McCann is the Founding Director of the Sports and Entertainment Law Institute at the UNH Law School and a former Associate Dean for Academic Affairs. He recently joined Sporticoas a writer and legal analyst and was formerly Sports Illustrated’sLegal Analyst, writer for Sports Illustratedand SI.com, and the on-air Legal Analyst for NBA TV. He is a Patriots fan.